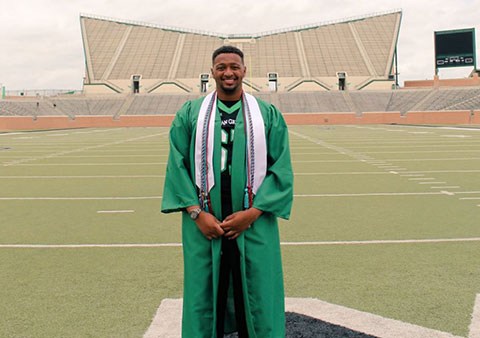 Raised in a well-educated family, there was no doubt Miles would head to college.

“Growing up, there were standards we all had to meet – college wasn’t optional,” he said.

Each year, Miles spent a couple weeks with his grandparents in Louisiana.

“My grandfather was one of the first black interns at NASA, and my grandmother teaches reading for the gifted. She taught me to read, and he taught me basic math concepts.”

So, when it came time for Miles to look into colleges, it was no surprise he would pick one that would allow him to combine his educational goals with his favorite sport – football.

“I felt like I was just at home – the family atmosphere and the football aspect,” he said. “UNT was one of the only schools that could show me someone who played football and did engineering.”

Academically, Miles had participated in a variety of student organizations, but it was his senior design project for the Department of Mechanical Engineering that had really challenged him.

“Up until then, it had been mostly theory. With senior design, we had to actually make something,” he said. “There’s always experimental error and human error and trying to put that with real-world application – there’s just always going to be something that happens.”

Miles’s typical day went a little something like this: 7:30 a.m. workouts with lifting and conditioning, 8:30 to noon back-to-back class, 1:50 p.m. pre-practice and tape review, practice, mandatory team dinner at 6:30 p.m., and class or study hall afterwards.

It was a routine that helped him and his team beat Southern Miss last season – a game Miles, number 67, is truly proud of – and helped land the team a spot at the Heart of Dallas Bowl.

“Southern Miss was probably my favorite game to play in; it was a monster game,” he recalled. “It was our fifth win, which helped us get into our bowl game. That was a pretty big deal. And, afterwards, I received an Honorable Mention for offensive lineman.”

Both experiences, he said, are what make him bleed UNT green.

The alumnus, who graduated in May 2017, is now tackling his MBA at UNT and also plans to continue playing ball this fall.

“I still have two years of eligibility, so I’m still going to play while I get my MBA,” he said. “I figured my MBA would make me more competitive in the job market for leadership and management positions, and I still get the opportunity to play Mean Green football.”