Self-organization in materials subjected to irradiation and plastic deformation

Materials are commonly subjected to external forcing, for instance plastic deformation during fabrication and shaping, and irradiation during service life in nuclear reactors. While such nonequilibrium forcing can introduce detrimental evolution of material properties, it also creates opportunities for the dynamical stabilization of novel microstructures via self-organization. In particular, ion irradiation and plastic deformation can result in the stabilization of intragranular nanoprecipitates. These intragranular nanoprecipitates can impart radiation resistance by providing a large and stable density of interfacial sites for point defect elimination, while at the same time improving mechanical properties. We use phase field modeling of generic alloys subjected to irradiation for mapping out the domains of stability of various competing steady states, which are then organized into steady-state phase diagrams. We show that the evolution of these alloys can be seen as driven by effective free energies, thus allowing for a direct rationalization of those steady-state phase diagrams. We show that a novel definition of interface energy is needed when these alloys self-organize into nanoscale patterns. An additional intriguing result is that not only phases but also microstructures can coexist in driven systems, suggesting that self-organization, and self-adaptation, can take place at a global scale. 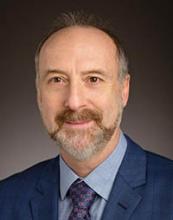 Pascal Bellon is the Donald W. Hamer Professor in the Department of Materials Science and Engineering at Illinois After working as a research scientist at CEA-Saclay, France, he joined in 1996 the Department of Materials Science and Engineering at the University of Illinois at Urbana-Champaign as a tenure-track Assistant Professor, and was then promoted to Associate Professor in 2002 and Full Professor in 2009. He received an NSF CAREER award in 1998; the Don Burnett teaching award in 2000; and the Stanley Pierce award in 2009. He was named a Racheff faculty scholar in 2012 and he was inducted as the Donald W. Hamer Professor at Illinois in 2016. Dr. Bellon served as interim Department Head in Materials Science and Engineering at Illinois in 2019. His research focuses on materials driven into non-equilibrium states by external forcing such as irradiation by energetic particles and plastic deformation, and on investigating how these driven systems can self-organize at the nanoscale and can improve their performance in service via self-adaptation. The research combines experiments, including nanoscale characterization by transmission electron microscopy and atom probe tomography, atomistic simulations and continuum modeling.