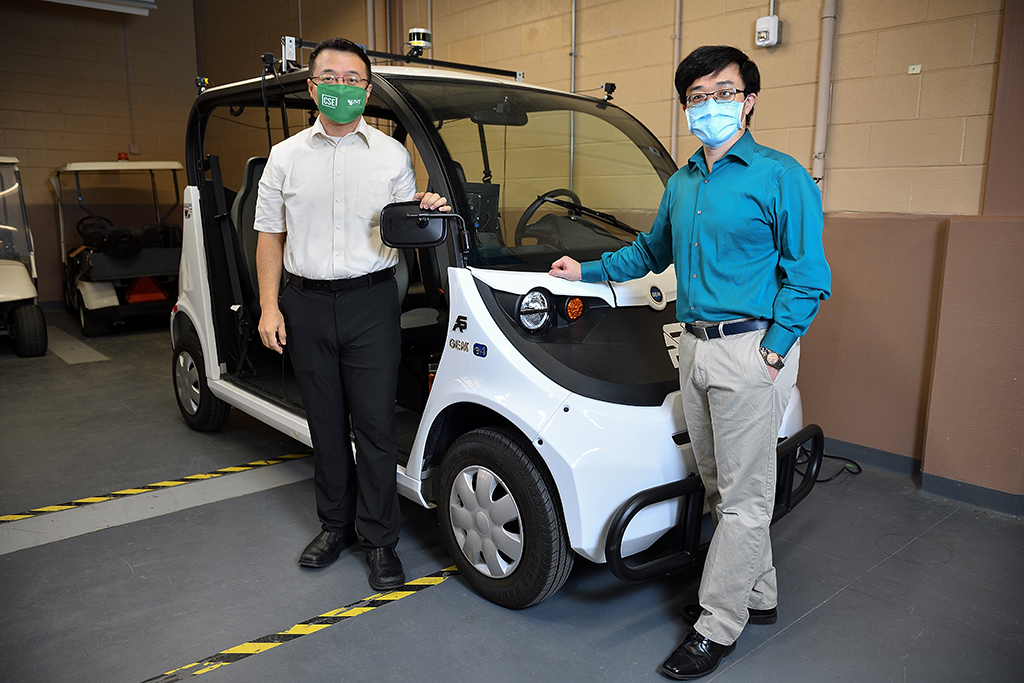 Hot on receiving a $400,000 National Science Foundation grant earlier this year, computer science and engineering researchers Qing Yang and Song Fu were awarded two more NSF grants for their ongoing research in the field of connected and autonomous vehicles (CAV).

The first is a $500,000 grant to help create a workforce development training. The second is a $100,000 NSF EAGER award to provide a solution that helps protect data used and transmitted by CAVs.

With their first grant awarded by the NSF Office of Advanced Cyberinfrastructure, Yang and Fu will develop and implement a workforce development training geared specifically toward researchers in CAV.

“We are training the research workforce. We want them to have projects that complement what they’re learning,” said Yang, an assistant professor in the Department of Computer Science and Engineering. “The training will be project-based, giving participants the opportunity to work on practical developments in the field and apply knowledge they’ve gained from the course and outside study.”

Their model calls for an industry advisory board that will assist in ensuring the training stays up to date with current trends and developments within the field. Researchers from companies such as Fujitsu Communication Network, Texas Instruments and Microsoft Research who are on the leading edge of CAV will work alongside government agencies like NSF, Texas Department of Transportation and researchers from other universities as part of the board.

“We are probably the first in the U.S. to propose to develop an autonomous vehicle cyber infrastructure,” said Fu, an associate professor at the college. “It’s very new. It’s combing all the new technologies, like self-driving cars, IoT and also edge computing – all new technologies we’re very interested in.”

Yang and Fu plan to offer the training annually as well as in their summer research experiences for undergraduates (REU) program and at international conferences. The team also plans to host a CAV workshop at UNT that will be open to the public, and hopes to offer undergraduate courses on autonomous vehicles in the future. A graduate-level course already exists.

The second grant is a NSF EAGER award, which supports exploratory work in its early stages on untested, but potentially transformative, research ideas or approaches. For Yang and Fu, their project will explore how cooperative perception enables vehicles to exchange data among each other to better see and detect objects in a vehicle’s pathway. The method is a useful technique for advancing autonomous vehicle safety, but with the current data protection measures in place, very few vehicles are likely to share the sensor data due to privacy concerns.

“A vehicle can encrypt its sensor data before sharing it with others, however, data encryption only protects data security during transmission,” said Yang.

The team plans to design a privacy-preserving convolutional neural network (CNN) that uses the encrypted data generated by the vehicles to fuse and process that data into ciphertext.

“The proposed technique is a generic solution that can be extended to offer data privacy protection for other machine learning methods,” said Yang. “It will enable vehicles to securely share useful sensor data between each other, which can be extremely beneficial for extending the line of sight and field of view of autonomous vehicles, helping secure public safety and advance smart transportation.”