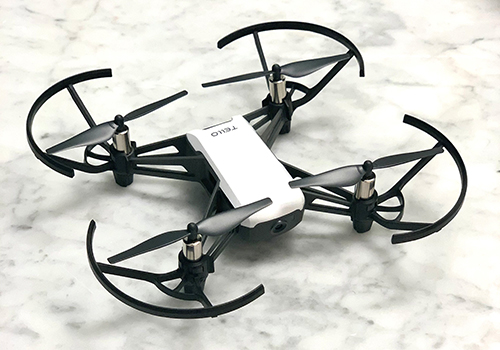 The IEEE UNT Robotics and Automation Society (RAS) took first place and $1,200 in the IEEE Region 5 Student Robotics Competition this past weekend.

The virtual competition challenged Department of Electrical Engineering undergraduate students Jared Riley, Emilio Rios and Cameron Mitchell to program a drone to autonomously identify four balloons by color, fly towards the balloons and pop them in an order determined by judges at the time of the competition. Once the drone was launched, the team could no longer interact with it while it carried out the pre-programmed instructions. UNT popped three of the four balloons, beating out 11 other universities.

"It was a really challenging task, because we had to calculate the distance between the balloon and the drone by using the camera on the drone and computer vision. We used our knowledge of statistics and calculus for the drone’s programming," said Riley, IEEE Student Branch President-Elect for 2021-2022. "Emilio knew how to code, which was imperative to the project."

The competition challenged the students to apply not only what they’d learned in the classroom, but also seek out and learn new skill sets.

"This competition really taught me how to use computer vision algorithms, which was something I’d not had any experience with before," said Rios.

"This was a great way to dive into something that you’ve never seen before – to have to figure out your own deadlines and goals and carry them out," he said. "It was a really great learning opportunity."

"These guys really worked their tails off," said Rivera. "They came in with little experience with computer vision and with the Python programming language and worked late nights and weekends to pull it off. I think they found this experience really good."