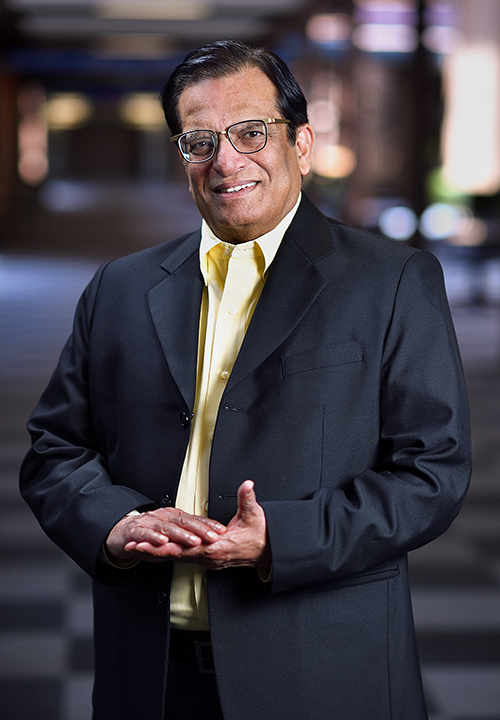 Department of Mechanical Engineering Professor Vish Prasad has received the ASME 2020 Heat Transfer Memorial Award, an honor that recognizes his significant contributions to the heat transfer community and ASME’s Heat Transfer Division as chair of technical committees, organizer and chair of national and international conferences, and editor/associate editor of proceedings, journals, and book series as well as for outstanding leadership in international collaborations.

Prasad’s longtime research in heat transfer and thermal processing has had a significant impact on how researchers approach heat transfer and thermal processing of materials today.  Early on, he developed a novel scientific approach to crystal growth using modelling and simulation methods to better understand how crystals change as they undergo extreme thermal conditions. This approach has since been used industrially to grow larger crystals of silicon, a critical material for computer chips and solar cells and gallium nitride, the material used for LED lights.

He’s also made major advances in understanding chemical and physical vapor depositions for thin films in microelectronic applications. His work also led to many advances in thermal spray coating that has been commonly used to surface coat components and systems for very high temperature applications, such as in automobile and airplane jet engines that could be damaged from friction and heat.

“Dr. Prasad has made invaluable, unparalleled contributions to the broad field of bulk crystal growth where melt flow, heat transfer, and phase-change phenomena are dominant,” said Kedar Gupta, managing director at Clean Energy Venture Group. “And he has brought innumerable scientific advancements and technological innovations to the crystal growth processes and systems for materials that are critical to electronic, solar, and LED applications.”

In addition to his research endeavors, Prasad mentored more than 25 doctoral students and post-doctoral fellows, inspiring many to join the field. Dr. Prasad’s research has been supported by the National Science Foundation, U.S. Department of Energy, U.S. Department of Defense, national labs and industry, including IBM Corporation and leading crystal growth companies. He has been a PI/Co-PI of the NSF Materials Center (MRSEC) on Thermal Spray, two DOD MURI Consortia on Crystal Growth, several industry-university partnership projects, including NSF GOALI, Partnership for Innovation, and Phase I and Phase II SBIR/STTR projects from NSF and DOE.

Prasad also has been editor-in-chief/co-editor of Annual Review of Heat Transfer since 2002 and a Springer “Handbook of Crystal Growth,” co-edited by Prasad is considered the most comprehensive publication on the topic.