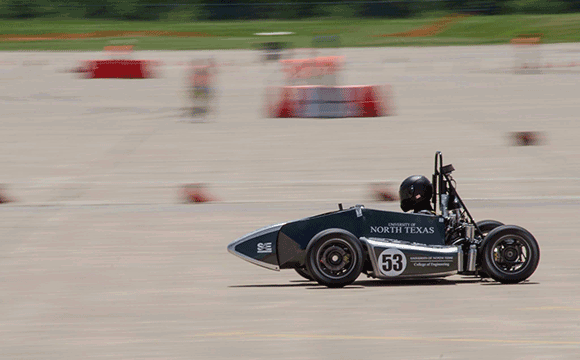 This year’s ranking was the highest-ever the team had received, outranking University of Texas at Austin, Southern Methodist University, University of Washington, Auburn University and Faculdade de Engenharia de Sorocaba, a Brazilian team ranked 28th in the world.

“This year, we stuck close to what we know and changed only specific things and changed them well,” said Kyle McDougal, a junior in the Department of Engineering Technology. “Also, knowing why we were changing something was big.”

“We were more prepared this year than we had been in years before,” said McDougal. “We were more confident in our car, and we had a team full of people who had been to competition before and knew that it takes.”

The competition is a culmination of a year’s worth of work. Mean Green Racing, a segment of the student organization, Society of Automotive Engineers, is already up and running on next year’s model.

“It’s good for those engineers who have been working on this car – learning the rules, seeing the requirements – to then go look at how engineers at schools like MIT and Auburn interpreted the rules and did in the competition. It’s a great, well-rounded hands-on experience for any student in engineering.”

Much of the support Mean Green Racing receives each year is from UNT’s College of Engineering, along with local and national sponsors.

“The support from the College of Engineering and the Department of Engineering Technology has been amazing,” said McDougal. “They have always sent someone with us to ensure we have the help we need to succeed, and Bobby Grimes has been great to work with each year.”