High-cycle fatigue (HCF) is the dominant failure mechanism of many engineering applications. For fatigue life predictions safe-life and damage-tolerance approaches have been used extensively, however, they are limited due to the empirical nature. These limitations can be addressed by performing a direct numerical simulation of the fatigue loading history using computational methods such as the finite element method (FEM). However, the extended spatial and time scales associated with the HCF problem remain as critical challenges. In this talk, I will first present a multiscale HCF simulation approach called the extended space-time finite element method (XTFEM) that was developed in my group. I will demonstrate that the predictive capability of FEM can be greatly extended by XTFEM in handling multiple temporal scales for simulations of the HCF problem [1]. To address the computational challenge in capturing nonlinear material behavior associated with material microstructures under the HCF loading condition, a microstructure-based HCF damage model has been established by integrating machine learning [2-3] with Damage Mechanics. This differs from the traditional phenomeonological constitutive relations in that it not only accounts for the average behavior but also captures the nonlinear and highly localized material responses that are associated with the microstructure. Machine learning based on k-means clustering algorithm is introduced to enable direct modeling of complex material microstructures with much reduced computational cost. Finally, Examples of HCF life prediction are presented to demonstrate the robustness of the proposed multiscale approach. 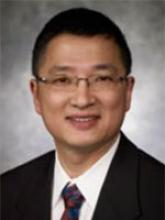