Interfacial design of hybrid composites: a path to novel reinforcements for 3D printing and out of autoclave processing

Fiber reinforced polymer composites (FRPs) have been extensively utilized in loadbearing structures. Their ease of forming and their superior in-plane mechanical properties have made them a viable replacement for conventional metallic structural materials. However, FRPs are prone to several drawback such as weak interlaminar fracture toughness, poor out-of-plane properties, vulnerability to viscoplastic deformation and poor impact energy absorption. To overcome these drawbacks, several remedies were carried out to enhance the fiber/matrix interfaces via chemical treatments or utilizing stiffer nanomaterials at the interface. This presentation will elucidate fundamental processes for developing hybrid, multifunctional composites based on surface grown carbon nanotubes (CNTs) and/or metal organic frameworks (MOFs) on continuous carbon fibers. This presentation will outline the development of a novel low temperature synthesis technique, graphitic structures by design (GSD), to grow CNTs on carbon fiber. The novelty of the GSD technique resides in its ability to pattern-grow CNTs in different morphologies to achieve optimal mechanical performance. Mechanical testing revealed that the hybrid composites possess superior impact, vibration, interlaminar shear strength, fracture toughness and fatigue resistance compared to classical FRPs. This investigation also corroborates a novel methodology for developing hybrid reinforcements that comprises carbon fibers and MOFs. The growth of MOFs is scalable, non-destructive to the fibers, and easily tailorable to control the porous morphologies of the MOFs at the interface. Furthermore, the study demonstrates the feasibility of utilizing the MOFs as a catalyst to grow carbon nanotubes (CNTs) on the carbon fibers. Several improvements emanated from the MOFs placement on the interface including improving the strength, enhancing the damping parameter, the glass transition temperature of the composite and alleviating the shear lap joint strength.

Since the both GSD technique and MOFs synthesis are readily transferable to chopped fibers, this presentation also will elucidate the ongoing feasibility study for utilizing hybrid reinforcements for 3D printing of epoxy-based composites and for processing them using Joule heating out- of- an autoclave. 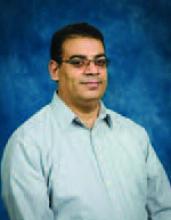 Dr. Marwan Al-Haik is Professor of Aerospace Engineering at Embry Riddle Aeronautical University; the world’s largest undergraduate programs in Aerospace Engineering (1920 students). He served as associate department head and graduate program coordinator. He received his MS and Ph.D. in Mechanical Engineering from Florida State University (1997, 2002) and joined the National High Magnetic Field Laboratory (NHMFL, Tallahassee FL) as a post-doc for two years. He joined the University of New Mexico Mechanical Engineering department (2005-2010) where he received several awards including the NSF CAREER award and two DURIP awards from DoD. Upon joining Virginia Tech Engineering Science and Mechanics (2010-2015) he received several research awards (ONR, NSF, AFRL) and supervised 6 PhD dissertations and 8 MS thesis to completion. His primary area of research is in solid mechanics, composites, and nanomaterials. His research portfolio included over 150 refereed publications, 6 issued US patents and over $8.5 M in funding as PI/Co-PI. He was named as an ASME fellow in 2015. He is the associate editor of Elsevier’s Aerospace Engineering and Technology, the lead journal in aerospace Engineering.