Growth and characterization of single-crystalline and bi-crystalline thin films for reliability studies, with introductory comments on the history of MSE at Stanford

The short overview of history of Department of Materials Science and Engineering at Stanford will be presented, which traces back over 100 years to Department of Mining and Metallurgy established in 1919. The history is a case of ever-changing adjustments to serve the needs of industry and society, including inevitable tribulations and also triumphs that this small department experienced in a competitive university environment with lessons for other departments as they plan for their future.

The growing single crystalline and bi-crystalline thin film stripes of gold on amorphous insulating substrates will be the focus of the research presentation. The method opens up the possibility of creating interconnect lines and pads in microelectronic devices without the troublesome grain boundaries. The process involves structures that are encapsulated in an insulating silica crucible, together with one or more small seeds of platinum having a higher melting temperature.  The system is heated to temperatures above the melting point of gold, followed by cooling and crystallization.  During the heating process, the gold and seed form a high melting point solid solution, which directs liquid phase epitaxial growth. The process provides for high-yield growth of thousands of bi-crystals per wafer. It is envisioned that these crystals and bi-crystals will enable the systematic study of the electrical, optical, chemical, thermal, and mechanical properties of both thin film single crystals and individual grain boundary types. 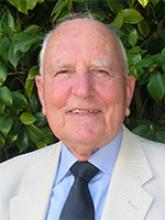 In 1964 Professor Nix received the Western Electric Fund Award for Excellence in Engineering Instruction, and in 1970, the Bradley Stoughton Teaching Award of ASM.  He received the 1979 Champion Herbert Mathewson Award and in 1988 was the Institute of Metals Lecturer and recipient of the Robert Franklin Mehl Award of the Metallurgical Society (TMS).  In 1995 he received the Educator Award from TMS.  He was selected by ASM International to give the 1989 Edward DeMille Campbell Memorial Lecture and in 1998 received the ASM Gold Medal.  He gave the Alpha Sigma Mu Lecture to ASM in 2000 and received the Albert Easton White Distinguished Teacher Award in 2002 and the Albert Sauveur Achievement Award in 2003, both from ASM.  He also received a Distinguished Alumnus Award from San Jose State University in 1980.  In 1993 he received the Acta Metallurgica Gold Medal and in 2001 he received the Nadai Medal from the American Society of Mechanical Engineers. He was elected Fellow of the American Society for Metals in 1978, Fellow of the Metallurgical Society of AIME in 1988 and Fellow of the Materials Research Society in 2011. He received the von Hippel Award from the Materials Research Society in 2007 and in 2011 was awarded the Heyn Medal of the German Society of Materials Science.  He received the national Monie A. Ferst Award from Sigma Xi in 2017. TMS/AIME has established the William D. Nix Award and Lecture, which will be given annually, in parallel with the Mehl and Hume-Rothery lectures, starting in 2020. In 1987 he was elected to the National Academy of Engineering and in 2002 was elected as a Fellow of the American Academy of Arts and Sciences.  Prof. Nix was elected to the National Academy of Sciences in 2003.

Professor Nix has been engaged in research on the mechanical properties of solids.  He has been principally concerned with the relation between structure and mechanical properties of materials in both thin film and bulk form. He is co-author of 450 publications in these and related fields and has trained 79 Ph.D. students in these subjects in his years at Stanford.  Professor Nix has taught courses on dislocation theory and mechanical properties of materials.  He is co-author of "The Principles of Engineering Materials", published in 1973 by Prentice-Hall, Incorporated, and has published a textbook entitled “Imperfections in Crystalline Solids,” with Wei Cai of Stanford, with Cambridge University Press as a part of an MRS series of textbooks on the fundamentals of materials science. In 2019 he published “A Century of Materials Science and Engineering at Stanford” to celebrate the centennial of the Stanford MSE department in that year.