A brief history of nanoindentation - and a little more

Since its introduction and early development in the 1980’s, nanoindentation has gained widespread acceptance as a tool for measuring and mapping the mechanical properties of thin films, thin surface regions, and small volumes of material. Hardness and elastic modulus are the most routinely measured properties, but techniques have also been developed for estimating fracture toughness, yield stress, strain hardening, creep, and residual stress. Many of these can be determined from indentations only a few nanometers deep.

In this presentation, we begin with a review of the historical developments that led to the technique, beginning with the early work of Hertz in the latter part of the 19th century and culminating with the 1992 Oliver and Pharr paper which has become the standard for hardness and modulus measurement. In the remaining time, we will provide a progress report based on recent work on the prospects for measuring power law creep parameters by nanoindentation. Creep measurements have largely remined elusive due to experimental issues associated with thermal drift as well as theoretical questions about how one converts creep parameters measured in indentation to the equivalent parameters measured using more conventional uniaxial tension or compression tests. 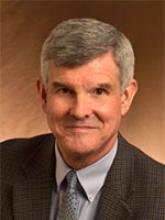 Dr. Pharr received ASM International’s Bradley Stoughton Award for Young Teachers of Metallurgy in 1985. His honors also include the Amoco Award for Superior Teaching at Rice University (1994), a Humboldt Senior Scientist Award (2007), the Materials Research Society's inaugural Innovation in Materials Characterization Award (2010), the University of Tennessee Macebearer Award (2015), and the Nadai Medal of ASME (2018). He is a member of the National Academy of Engineering (2014) and a Fellow of ASM International (1995), the Materials Research Society (2012), and TMS (2016). Dr. Pharr has been an Associate Editor of the Journal of the American Ceramic Society since 1990 and Principal Editor of the Journal of Materials Research since 2012. He is an author or co-author of more than 200 scientific publications, including 4 book chapters. His research focuses on mechanisms of plasticity and fracture in solids, especially at small scales.