With rapid expansion of advanced composites as primary load-support components in civil and military applications, the safety and long term durability of these heterogeneous materials become an issue of paramount importance. However, the complex material and structural responses of such materials, especially the progressive damage evolution, have not been fully understood despite decades of extensive research. Current composite design relies heavily on costly and time-consuming testing programs to cope with the vast uncertainties in strength and durability. New methods capable of predicting progressive damage evolution and quantifying their direct effects on structural integrity are currently in high demand.

In this talk I will present the recent advances in high-fidelity simulation based virtual testing (VT) for complex heterogeneous material systems using a new numerical approach named augmented finite element method (A-FEM), developed by my research group in recent years. After a brief introduction of the key features of the A-FEM, I shall demonstrate its virtual testing capability through two recent examples. The first is its application in multidirectional PMC laminates. This case will show that through a multiscale hierarchal analysis with explicit consideration of all major damage modes in each scale, the ultimate (static and fatigue) laminate strength can be adequately predicted from the intrinsic properties of matrix, fiber, and their interfaces. The second example is a recent application of the A-FEM on an envisioned short fiber reinforced composite. With this example we show that we can predict the material properties including the progressive damage and failure based on intrinsic properties of constituent materials only (i.e. no empirical parameters from actual testing of physical material). This represents a major step forward to achieve virtual designing of materials and structures.

Towards to the end of this talk I will discuss necessary future developments of the A-FEM for VT of other existing or novel material systems with various optimized microstructures. 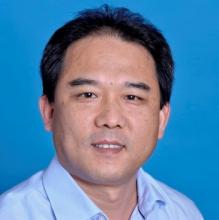 Prof. Qingda Yang is a full professor in the MAE Department at the University of Miami (UM). Dr. Yang’s recent research has focused on developing multi-scale methodologies that can lead to realistic virtual testing and designing of complex heterogeneous materials and structures under general and/or extreme thermal-mechanical loading environments. He is an author/coauthor of 90 journal publications, 4 book chapters, and more than 30 refereed conference proceedings. He was a past Chair of the Composite and Heterogeneous Materials Committee in ASME (2010-2012), and is currently serving an editorial board member for three professional journals. Dr. Yang is an award recipient of several professional and academic societies, including the Eliahu I. Jury Award for excellence in research (2007) and the Prevost’s General Research Award (2008), both from UM, and three Technical Excellence Awards from Rockwell Scientific company (2001; 2004; and 2005).