Thin-Film Transistors and the Future of Displays

Thin-film transistors (TFTs) were invented almost a century ago, and before the first demonstration of the point-contact transistor in Bell Laboratories. They are the enablers of flat-panel displays and x-ray imagers and are being considered for several future applications. We will examine how TFTs operate and what makes them so well suited for flexible and printable electronics. The talk will include a history and evolution of TFTs, materials and device structures, and applications in flat panel displays. The latter part of the talk will look forward to the future of displays and how TFTs will continue to spur innovation in display technology. 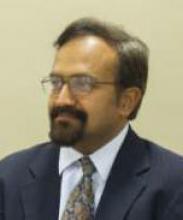 Ananth Dodabalapur received his Ph.D. degree in Electrical Engineering from The University of Texas at Austin in 1990. Between 1990 and 2001 he was with Bell Laboratories, NJ. Since 1992 he has investigated various aspects of the physics and technology of organic and polymer semiconductor devices. He has published more than 200 articles in refereed journals which have resulted in an H Index of approximately 90 (Google Scholar), and has 27 issued US patents. He is a co-recipient of the 2002 National award for team innovation of the American Chemical Society. Since September 2001, he is with The University of Texas at Austin and holds the Motorola Regents Chair in Engineering. His present research includes organic and inorganic thin-film transistors and optoelectronic devices, 2D materials device physics and device chemistry, and flexible thin-film electronics. In 2003, he co-founded OrganicID, a company that is investigating using printable polymer electronics to fabricate low-cost RFID tags for the 13.56 MHz frequency. He was the founding Editor-in-Chief of Flexible and Printed Electronics.