Edge Computing: A New Computing Model for Internet of Everything | COLLEGE OF ENGINEERING
Skip to main content

Edge Computing: A New Computing Model for Internet of Everything

The proliferation of Internet of Everything and the success of rich cloud services have pushed the horizon of a new computing paradigm, Edge computing, which calls for processing the data at the edge of the network. Edge computing has the potential to address the concerns of response time requirement, battery life constraint, bandwidth cost saving, as well as data safety and privacy. In this talk, he will discuss the vision and challenges of Edge Computing, followed by their recent work on edge computing. 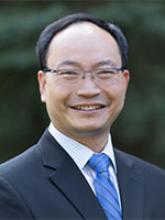 Weisong Shi is a Charles H. Gershenson Distinguished Faculty Fellow and a Professor of Computer Science at Wayne State University, there he directs the Mobile and Internet SysTems Laboratory (MIST) and Connected and Autonomous dRiving Laboratory (CAR), investigating performance, reliability, power- and energy-efficiency, trust and privacy issues of networked computer systems and applications. Dr. Shi is one of the world leaders in the edge computing research community, and has been advocating Edge Computing since 2014, a new computing paradigm in which the computing resources are placed at the edge of the Internet, in close proximity to mobile devices, sensors, end users and the emerging Internet of Everything. Dr. Shi was on leave with the National Science Foundation as a Program Director in the Division of Computer and Network Systems, Directorate of Computer and Information Science and Engineering during 2013 – 2015. Dr. Shi has been actively involved in the activities of IEEE Computer Society. He had served as the Chair of the Technical Committee on the Internet (TCI) during 2012-2016. He is currently serving on the Academic Advisory Board of IEEE Computer Society. Dr. Shi is the inaugural Editor-in-Chief of Elsevier Smart Health Journal, Associate EIC of IEEE Internet Computing Magazine, and associate editors of several journals, including IEEE Transactions on Services Computing, ACM Transactions on Internet of Things, to name a few. Dr. Shi is the founding steering committee chair of ACM/IEEE Symposium on Edge Computing (SEC) and IEEE/ACM Connected Health: Applications, Systems and Engineering (CHASE).  He is an IEEE Fellow and an ACM Distinguished Scientist.