The unique properties of many structural and functional materials originate from structural phase transformations with symmetry breaking that produce self-accommodating multi-phase and polydomain microstructural patterns. Familiar examples include ferroelectrics, ferromagnetics and shape memory alloys (SMAs). Even though the micron-scale domain structures in some of these materials have been studied for over a century (such as the martensitic domain structures), the properties of their nano-domain counterparts have not yet been explored till recently. In this presentation, using structural transformations in ferroelastic systems (including TiNi SMAs and GUM metals) as examples and by computer simulations, we show how to utilize defect engineering or transformation pathway engineering to develop novel nanostructures with unprecedented properties, including nearly hysteresis-free and linear superelasticity, nearly zero thermal expansion (Invar anomaly), and low and temperature-independent elastic modulus (Elinvar anomaly). Utilizing non-conventional, solid-solid phase transformation pathways to generate high density of hetero-phase interfaces either uniformly or non-uniformly distributed in space will also be demonstrated. Most of these new alloy design concepts demonstrated by the computer simulations have been realized in experiments and most of the simulation predictions have been confirmed by experimental characterization and testing. The findings have not only allowed us to solve some long-standing puzzles, but could also open a new avenue for the development of new concepts and design strategies for next generation of smart nano-structured materials for widespread technological applications. 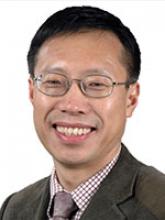 Professor Wang received his B.S. (1982) in Metallurgy from Northeastern University of China and Ph.D. (1995) in Materials Science and Engineering from Rutgers University. He joined the MSE Department at The Ohio State University (OSU) in 1996 as an assistant professor and became a full professor in 2005. His research interests are in the field of theoretical modeling and computer simulation of microstructure evolution during phase transformations and plastic deformation in high temperature Ni-base superalloys, Ti-, Al- and Mg-alloys, ferroic functional materials and metallic glasses. He is at the forefront of developing and applying mesoscopic modeling approaches (in particular the phase-field method and its integration with atomistic and continuum approaches) for both fundamental and applied research. Prof. Wang has received numerous awards including CAREER Award (1997) from NSF, KC Wong Research Award (2005) from Education Foundation of Hong Kong, Hsun Lee Research Award (2006) from Institute of Metal Research, Chinese Academy of Science, ARC International Fellow (2009) from Australian Research Council, Harrison Faculty Award for Excellence in Engineering Education (2010) from OSU, Fraunhofer Bessel Research Award (2012) from Alexander von Humboldt Foundation of Germany, and Prof. Brahm Prakash Visiting Chair (2014) from Indian Institute of Science. Prof. Wang has published ~ 190 refereed journal articles (~ 90 in Acta Materialia).