Role of deuterium and hydrogen in the physical understanding of nano-friction in a-C:H/D thin films | COLLEGE OF ENGINEERING
Skip to main content

Role of deuterium and hydrogen in the physical understanding of nano-friction in a-C:H/D thin films

The friction phenomenon is a complex manifestation of the nature. In spite of phenomenological laws can describe the friction force at different scales, the fundamental physical understandings of such a phenomenon do not have consensus. Phenomena such as phononic, electronic, magnetic, and also electrostatic effects and models were developed in order to explain the meta- and nano-friction behavior of materials. In this work, we report the friction behavior of a diamond spherical dome sliding on different amorphous carbon thin films containing different amounts of hydrogen and/or deuterium inspecting at the meta-nanoscale indentation. Two important situation are reported. Firstly, for samples where hydrogen was replaced by deuterium in the thin film bulk, the friction coefficient decreases for increasing deuterium included in the carbon underneath structure. Secondly, for samples where hydrogen content is increased on the surface, the friction coefficient decreases with the increasing of the ratio H/C at the surface. In this paper, we discuss two different physical mechanisms describing these peculiar experimental results: dissipation effects associated with phonon coupling and van der Waals forces contributions coexisting and determining the friction behaviour of a-C:H/D for the cited studied situations. 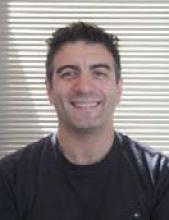 Carlos Alejandro Figueroa holds a Bachelor Degree in Chemistry from the University of Buenos Aires (Argentina) and a PhD in Physics from the State University of Campinas (Brazil). His current interest focuses on adhesion mechanisms of a-C:H thin films on steels by using silicon-containing interlayers and on fundamental physical mechanisms of friction at the nanoscale. He serves as Adjunct Professor at the University of Caxias do Sul (Brazil). He received awards in South America (Santander, Siemens, Petrobras) and China (International Chemistry Olympiad). He is a member of Brazilian-MRS and AVS. He is the author of more than 90 scientific papers with about 1000 citations and 5 patents. He has given 5 invited talks. He has a worldwide scientific networking including Universities and Research Institutes from Europe, and South and North America. Finally, he has launched 3 spin-off companies in plasma surface engineering.