Monitoring the levels of combustion gases such as H2, CO and NOx from high temperature (500°C and higher) combustion environments requires materials with high thermal stability and resilience and can withstand harsh oxidizing and reducing environments. Au nanoparticles (AuNPs) have shown potential in plasmonic gas sensing due to their catalytic activity, high oxidation stability, and plasmonics sensitivity to changes in its surrounding environment. Encapsulation of the AuNPs in a variety of metal oxides enables both sensitivity and selectivity within multivariable sensing array studies. Au nanorods (AuNRs) embedded in metal oxides allows for a significant variation in the plasmonic wavelength region that is able to be probed as well as enabling both dipole and multipole plasmon modes to be exploited for sensing applications. Integration challenges will be highlighted and utilization of thermal energy harvesting methods enables the demonstration of spectrometer free detection of combustion gases. 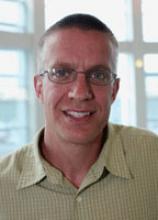 Michael A. Carpenter received his B.S. in chemistry from the State University of New York College at Geneseo in 1991, and a Ph.D. in physical chemistry from the University of Rochester, NY in 1996. He was a postdoctoral associate at Cornell University from 1996 to 1998, and was a postdoctoral associate at Pacific Northwest National Laboratory from 1998 to 2000. In 2000, he became a staff scientist at Albany Nanotech. In 2002 he was appointed as an assistant professor and in 2009 was promoted with tenure to associate professor in the College of Nanoscale Science and Engineering at the University at Albany-SUNY. He is currently the Interim Dean of the College of Nanoscale Engineering and Technology Innovation and is an associate professor in the Colleges of Nanoscale Science and Engineering at SUNY Polytechnic Institute. Carpenter has edited a book entitled “Metal Oxide Nanomaterials for Chemical Sensors, has published two book chapters, 61 journal publications, his work has over 1100 citations, and he has given 79 presentations. Carpenter has led the development of plasmonics for use as harsh environment chemical sensors and recently developed thermal energy harvesting methods, which enables an integrated platform for plasmonics based detection of emission gases at temperatures exceeding 500°C to be realized. Five patents have been filed with two being granted and several more are under development for work in his laboratory.